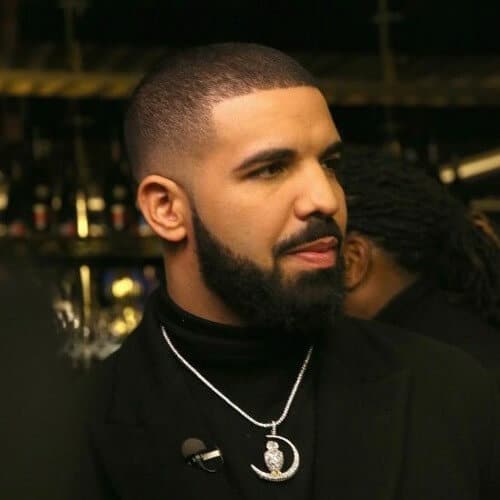 Do you like Drake and you want to get his beard style?

You are not alone! Many of us have been there before!

So, if you want to learn everything about Drake beard you are in the right place!

The Drake beard style is slick, neat, stylish and works best for men who want to show that they take care of themselves.

Prince Harry and Ryan Reynolds rocked this look, but Drake ruled this beard style when it comes to neatness. He maintained it properly, with stragglers checked and edges accurately defined.

It can be the ideal style for most men that are able to grow full beards.

To get a beard like Drake, you have to;

This is, in short, how you can grow and trim a beard like Drake but let’s get into some details!

Before we dive in Drake’s beard let’s remind ourselves who is Drake and why so many men want to adopt his style.

Drake has one of the most impressive and unexpected careers in the music industry. He is believed to be a myth than man. He is a 34-year Canadian singer, rapper, actor, producer, songwriter, and entrepreneur.

He gained recognition and won hearts by his fantastic performance in the television series Degrassi: The Next Generation (2001 – 2007). He released his first album in 2006; mixtape Room for Improvement, and he left the TV series to follow a music career and released the mixtapes Comeback Season (2007) and So Far Gone (2009).

Then he signed a recording contract with Yong Money Entertainment.

In 2010 his debut album “Thank me Later” was released. In 2016 his fourth album “Vies (2016), hit atop the Billboard 200, becoming the first even album made by a male solo artist to make such massive progress in over a decade.

“In 2012, Drake founded the OVO Sound record label with collaborator 40, and in 2013 he became the “global ambassador” of Toronto Raptors after linking up to the executive committee of the NBA franchise. In 2018, he was the reason for Toronto’s CAD$8.8 billion whole tourism income per annum.”

Drake is rated as the highest-certified digital singles artist in the US by RIAA, with above 170 million records traded. Drake is also known as Hot beard Bling as he has a really great beard.

Read Also: James Harden With And Without A Beard

The good news is that you can also have a kick-ass beard like him without dropping an album or even waiting to become rich!

After this overview of Drake’s life, let’s talk about the things you are interested in knowing!

Drake Beard Styles: How Long They Are?

Drake’s beard style makes him look sexy and attractive, which makes every lady turn head! Not only his raps and lyrics inspire people, but so does his beard!

For the most time, he wears a full short beard (12-13mm – 1/2 inch long) but if you’re a guy with uneven and patchy facial hair, you might wish to go for a shorter beard style (stubble) or a goatee.

Drake has tried several beard styles; let’s have an overview of some of Drake’s top beard looks.

A beard trimmed with neatness complements most face shapes, while a few simple hacks will help tailor it to your personal mug by lining up the lengths in basic areas.

For instance, if you have a round face, trimming the sides shorter will help make a face look longer, while if the sides are left slightly longer, you can add width to a narrow, long face.

Be mindful that a shorter beard trimmed near the jawline is notoriously unfavorable for those with a double chin.

However, this is the most uncomplicated beard style for anybody. I would suggest you try it at least once because;

So, my dear fam, get ready to know the steps to achieve the stylish Drake beard style.

How To Get Drake Beard Style

Over the years, Drake has posed so many different beard styles, each of which inspired us to rock!

You can get his beard by following these simple and easy steps. Obviously, if you wanna grow a stubble beard it will be different from a full beard or a beard with sideburns.

However, his main beard style is the short beard.

Step 1: Allow your beard to grow

At this stage, you will understand the basic things. So let’s begin from the bottom. Think of it as, you have shaved your beard, and you have a clean face. Let your beard grow for a few weeks. 3-4 weeks will be enough.

Although beard growth varies from person to person it is safe to say that 1 month is enough for nearly everybody. Grow it at least 0.5 inches. For those who are concerned about their curly beard, don’t panic. You will trim it soon.

This step is necessary. If you already have a stubble (short) beard obviously you will need to wait for less.

Washing and brushing your beard will make it easy for your to trim it properly. Many times hair stick together especially if you have a curly beard.

Having a clean beard that has a certain direction makes it easier for your trimmer to do its job and ensures that it won’t pull any hair.

It will just take you 2 minutes don’t skip this step!

This is the most important step. Choose the beard style you like and then place the right adjustment to your beard trimmer.

For instance, if you go for the stubble beard you can adjust the trimmer to 4-5mm.

And if you want to only have long sideburns you should carefully visualize the lines and then trim the rest of your face without any guard on the trimmer except for the sideburns.

This is the last task to have a lavish style like Drake. Get your razor and trimmer ready. Make sure you have a front mirror with good light on your face.

After having trimmed down your facial hair to your desired length it is time for the details.

Many men do not create these lines but Drake does. And his lines are very sharp. He takes care of them in a consistent basis.

The neckline should be up to 2 fingers width over Adam’s apple. Your cheek lines should be straight.

Step 5: Do the finishing

Most of the time, Drake wears his beard along with a buzz cut.

What that has to do with us, though?

Your beard and your buzz cut cannot be disconnected otherwise you will look weird.

You should fade your beard to connect with your buzz cut smoothly.

There is much more I wanna say for fading a beard but this is the easiest way. Stick to the basics.

Maybe the first time you need to watch your barber doing it but then you will be able to do it yourself very easily.

The strength of Drake’s beard is that it’s black.

Therefore, it is a good idea you add a suitable amount of black dye all over the beard.

Not every one of you wants to dye his beard which is totally understandable. However, if you want to look like Drake, in my opinion, you have to give it a try. You can always remove the beard dye if you don’t like it.

Now that we have discussed how to get the beard style, let’s learn how to maintain Drake’s beard style.

How To Maintain Drake Beard Style

Creating Drake’s beard style is the first step but the second one is how to maintain it for the long run.

Obviously keeping your beard short is vital to maintain this style. Facial hair grows fast so you will need to trim it down every now and then.

Along with trimming the whole beard you need to also trim and sharpen your lines and your sideburns.

Remember that this distinguishes Drake’s beard from the different short-lengthed full beards that other guys wear.

The next thing you need is also very obvious. Everyone needs to wash his face daily to remove dead cells, hairs, to open the pores etc and bearded men are no different.

Moving on, brushing a beard is really underrated. By combing your beard, you spread the natural oils, remove dead cells and dirt from your face, train your beard to grow in a certain direction, keep your beard hair from sticking out, and much more.

The final step to keep your beard clean and strong is to apply beard oil and moisturizer. Under skin dryness is very often when we are growing beards.

Keeping our skin healthy is vital for looking good.

Condition and moisturize the hair and the skin underneath to avoid beard dandruff.

Massage with a balm or beard oil with your fingertips to ensure its contact with the skin. If you really want to grow your beard like Drake, you should use high-quality beard care products, including beard trimmers, oils, brushes, moisturizers, etc.

The good thing is that they all are extremely cheap except for the trimmers. But, remember you will need to buy a trimmer very rarely if it is a good one.

These are the top trimmers that you can use to get a Drake beard.

This beard trimmer dominates others for its unique specifications. It can cut twice as close as the other two trimmers – to 0.2mm, to be accurate – it has twelve separate combs, so you can choose to trim hair up to your desired length.

This is a waterproof trimmer and lasts an impressive 180 minutes of charging.

The cutting range of 0.2mm to 25mm and 3 hours usage time after 60 minutes charging makes this beard trimmer the best to get a Drake beard style.

You’ll find it extremely difficult to get a better beard trimmer than this.

With its easy-to-reach mechanical adjustment wheel, selecting from 9 different trimming lengths from 0.5 to 18mm – is an out-and-out cinch, and as there’s only one clip on the comb, you don’t need to lose any fiddly extra bits.

The trimmers perform really well, cutting equally every time without hitching. Thankfully, its ceramic design obviates the need to oil the blades.

The cutting range of 1.5mm to 18mm and 40 mins usage time after 12-hour charging makes this beard trimmer the second good option to get a Drake beard style.

This beard trimmer is proof that you don’t have to spend a lot on getting a tremendous all-around trimmer.

This trimmer comes with two fine combs of different lengths, featuring 20 cutting lengths from 1 to 20 mm, and the accuracy wheel makes it easy to adjust the comb up or down in 0.5 increments.

This trimmer produces effortless results, and because of its AutoSensing technology, you can set the trimmer’s power according to the thickness of your facial hair.

This affordable beard trimmer features the cutting range of 1mm to 20mm and 100 mins usage time after 1 to 2-hour charging. All these characteristics make this beard trimmer the third best option to get a Drake beard style.

Drake Without A Beard

Drake has tried several beard styles but his signature style is the short beard.

It is a very common beard style but he gives much attention to it. He takes care of his lines and his sideburns so that his buzz cut and his beard connect perfectly.

In today’s article we discussed a ton of things that will help you get the style right. At least that’s what we shoot for!

If you have any comments or questions feel free to write them in the comment section below!